Cultural Marxism and the Nature of Power

In order for an individual, organization, ideology, or philosophy to achieve anything meaningful it must have power. Without power, an individual is helpless, an organization is merely a social club, an ideology is a collection of opinions, and a philosophy is an abstraction. To acquire power, one must understand how it operates. In order to determine the true nature of a subject, it is often useful to examine the topic through diametrically opposed schools of thought; to reflect on the nature of power, how it operates and is most effectively wielded, the views of Marx and Gramsci will be analyzed.

Marx believed that power is physical in nature, and stems from ownership of the means of production. Gramsci, by contrast, believes that power stems as much from the control of culture as from the control of the means of production. According to Gramsci, the ability to impose one’s values in the cultural sphere is just as important as the ability to effectively use physical coercion to achieve an end. A ruling group whose subjects share its the values does not need to resort to coercion to uphold the social order.

The question of how power works is a question which Marx does not hesitate to address. He contends that power is a product of economic conditions. As Marx states in The Communist Manifesto:

In other words, power does not flow from ideas, rather ideas flow from economic conditions. Power, according to Marx, is ownership of the means of production. It is physical, material in essence. Philosophy, culture, and law merely reflect the economic realities and interests of the ruling group; they are an effect rather than a cause.

Marx’s conception of man as an economic being is in accord with the account of man given by the philosophers of the Enlightenment, such as John Locke and Adam Smith. Smith in particular believes that man is by nature an economic being whose chief activity is the satisfaction of his various physical needs. The only disagreement between the two philosophers is a dispute over the best way to satisfy the above mentioned means: Marx favors communal ownership of the means of production, while Smith favors private ownership. Both would agree that ownership of the means of production, and their products, is what constitutes power. Thus Classical Liberalism and Marxism can be thought of as different sides of the same coin, rather than as opposites. In order to analyze these ideas through a truly opposing school of thought, we must find a thinker who does not conceive of man as merely homo economicus.

Gramsci, unlike Marx, believes that control over the institutions that produce culture is essential to maintaining power. As stated in what has come to known as The Prison Notebooks, Gramsci conceives of power as consisting of “two major superstructural ‘levels’: the one that can be called ‘civil society,’ that is , the ensemble of organisms called ‘private,’ that of ‘political society’ or ‘the State.’” What this means in practical terms is that society is not governed merely by the power of the state, which receives it power through the products of the means of production, but also has a cultural, social component, which justifies its existence. According to Gramsci, philosophers, political theorists, and other intellectuals “are the dominant group’s ‘deputies’ exercising the subaltern functions of social hegemony and political governance.” In other words, they create the values and ideology, which justify the existence of the regime. This cultural activity creates a state in which “the great masses” “consent” to the arrangement of society created by the dominant group.. While Gramsci attempts to ground his theory of power in a Marxist framework, it entirely contradicts the Marxian conception of power. Marx views ideas as merely the product of the economic conditions from which they spring. Civil society, law, and culture are determined by the economic conditions created by means of production that a society uses for commerce. By contrast, Gramsci believes that the two are interrelated, that culture is not irrelevant, rather it, along with economic activity, is a lever of power. While Gramsci asserts that culture, and the civil society which is it product, are of secondary importance, this is a far cry from the irrelevance that Marx assigns them. It is not too far of a leap to go from this assertion to the conception of power held by Marx’s true opposite in thought, Nietzsche, whose mouthpiece, Zarathustra, proclaims, “The greatest events—they are not the loudest but the stillest hours. Not around the inventors of new noise, but around the inventors of new values does the world revolve.” Nietzsche writes this in the context of an analysis of the events of the French Revolution, and asserts that the great tumult and re-ordering of society that resulted was but an effect; the cause was the values created by the philosophers of the Enlightenment. Thus, power flows from ideas.

Nietzsche—and Gramsci, to a lesser extent—believe that a culture’s values are the determining factor in which types of systems of thought, economics, and governance are legitimate. A ruling group that operates in accordance with the values of a society does not have to resort to barbaric and costly measures such as labor camps and secret police mechanisms found in totalitarian regimes. An effective regime rules by consent of some sort. This consent is a product of the fact that the majority of society shares its values. Thus, following this logic, the most effective way to achieve power is to control the educational and media institutions, because these are the institutions by which one can propagate ones values. If the majority of society shares your values, they will obey you of their own free will. Thus, real power stems from the production and control of culture: the literature, religious systems, and myths which shape the ethical framework of society. To evaluate the truth of this statement, one need only examine the fates of economic Marxism and cultural Marxism of the type propagated by the Frankfurt school.

Economic Marxism has failed in every country in which it has been implemented, because its fundamental assumptions about human nature are incorrect. Man’s nature is not infinitely malleable: man has certain drives that we understand as “selfishness”— preference for his own family and in-group, and a natural tendency to form hierarchies; these are the result of being a social animal, and they cannot be eradicated. To counteract this, Marxist regimes had to resort to great cruelty to uphold their programs and rarely did they have “consent,” in the Gramscian sense. The irrelevancy of Marx’s economic program is underscored by the fact that liberal capitalism, of the kind practiced in America and Europe, and authoritarian capitalism (or fascism), of the kind practiced by China, are the two dominant economic systems.

By contrast, cultural Marxism has triumphed in its struggles with traditionalism in the Western Europe and America (such as it is) as a result of following the Gramscian approach of acquiring and maintaining power. The cultural Left has won every conflict of significance with conservatives because their values are predominant in the universities, primary and secondary educational institutions, and the majority of media outlets. Through this predominance, they have the power to shape the values of the culture, to create and propagate the myths that shape the culture’s moral framework. This method of maintaining power is far more efficient than the gulags and secret police necessary to coerce people to live according to even an approximation of Marx’s economic ideas. Conservatives, like Marx, believe that power is essentially physically based—that it consists in winning elections, making money, and military power. Thus they are baffled that they “won” the Cold War and yet live in societies in which their values are marginalized, and in which they are increasingly becoming physically marginalized.

If radical traditionalists want to obtain power, we must create our own mythology that shapes the values of the culture; and we must create and put forth values that are compelling, both to the small minority that creates and imposes culture and the masses that consume it. 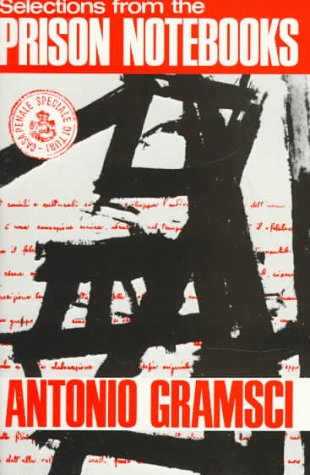 Selections from the Prison Notebooks

War of the Words