In Chapter Four of _The 10,000 Year Explosion_, Greg Cochran and Henry Harpending discuss the astonishing speed of genetic diffusion for skin lightening in Caucasians. The single most important gene is Solute Carrier 24A5, and the authors state that the skin lightening variant arose only about 5,800 years ago, yet now has a frequency of 99 percent in Europe and is found at significant levels as far away as Ceylon. Subsequent research has shown that it’s probably a little older, but as Cochrane and Harpending suggest, either way, the variant must have had a huge selective advantage and might have spread so rapidly that, at the most accelerated stage, a particularly old farmer could have noticed the change in appearance in his own village within his lifetime. 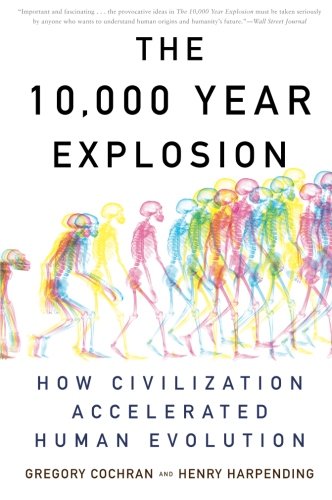 END_OF_DOCUMENT_TOKEN_TO_BE_REPLACED
No Comments on Evolving Before Our Eyes